Self and Self-management: Essays about Existing 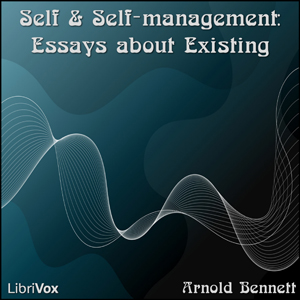 Self and Self-management: Essays about Existing

LibriVox recording of Self and Self-management: Essays about Existing, by Arnold Bennett (1867 - 1931). Read by Ruth Golding.

Bennett's essays always provide food for thought and bring a wry smile to the lips. Human nature, it appears, changes little over the ages, and Bennett's writing stands the test of time, though in the case of some of the essays in this eclectic collection, it is well to remember that they were written at the time of the First World War and the fight for women's suffrage. (Summary by Ruth Golding)

Reviewer: Timothy Ferguson - favoritefavoritefavoritefavorite - October 25, 2012
Subject: A piece which adheres slightly too strongly to its time
Arnold Bennett was an early writer on various subjects, best known now perhaps for stingingly public arguments with Virginia Woolf. In this book, he considers how to find work which is satisfying. His book is, in part, written to women doing war work, and seems to be an expression of his frustration about their complaints that the work is not personally rewarding. He’s an early exponent of the idea of psychological reframing. Not as good as some of his other books, and a little dated, but an interesting look at the mindset of war workers.

It is very well read, though.